Picture a chilly Mid-January afternoon in 2022. The place, Superior Van & Mobility in Fishers, Indiana. Staff members with the Muscular Dystrophy Family Foundation (MDFF), its board members, donors, and the Superior team are gathering for MDFF’s second, yes second, wheelchair van giveaway of the year! It’s a meeting planned long before, but due to COVID, it was delayed. The whole facility was buzzing with excitement as the real stars of the day were about to arrive, Maddox O’Connor and his family.

Never meeting Maddox, he would be described as any other energetic ten-year-old boy who loves baseball. However, there is something special about him many are unaware. It’s not that he has Mitochondrial Myopathy; what makes Maddox so special is that despite what life has handed him, Maddox has made it his life’s mission to help others, and, in doing so, he started a homeless ministry. What began a few years earlier with giving his lunch to a homeless person outside of the hospital where Maddox receives ongoing therapy, has now turned into helping many. It’s become his passion, but as his condition has progressed, the need to use his wheelchair has increased, thus making transportation more difficult. Today that is about to change!

Maddox has arrived, and the family begins exiting the vehicle. Everyone in attendance has gathered first inside for a quick bite to celebrate this event, however shortly after everyone migrated to the large showroom. To the family’s surprise around the corner, there was a red carpet leading up to a ramp on a mobility van. Maddox sees this and makes a beeline toward their new wheelchair-accessible van. It was a surprise by all but heartwarming nonetheless. Seeing the look on Maddox’s face and hearing the gratitude in his mother, Shawn’s voice as she began to thank everyone in attendance for making this day possible. Emotions were high.

As everyone gathered, Shawn began to tell their story of struggles and needs, which was incredible. Her dedication and devotion to her family show that she does not allow their circumstances to define them. Their family believes that through Christ, all things are possible and that Christ brought the O’Connor’s to MDFF. There wasn’t a dry eye in the showroom. Emotions filled the hearts of everyone as this very deserving family took the realization of what had been given to them.
The O’Connor’s new van will give Maddox more time to devote to his ministry, which by the way, is called Maddox’s Mission. It helps the homeless by providing food and care packages that he calls Blessing Bags. But he doesn’t stop there. Maddox also includes a handwritten note expressing his heart for the recipient and their situation. Maddox once said his ministry was important because he knows what it’s like living in a world he didn’t ask to live in and that everyone needs someone to love them. He is a true inspiration to others. 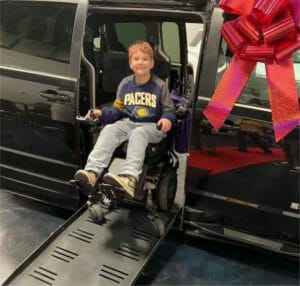 Maddox has set a goal for 2022. He plans to help 4000 homeless. If you would like to learn more about Maddox’s Mission or inquire how you may assist Maddox in achieving his goal, follow him on Facebook.

The Mission of the MDFF is Very Special

Since the 1950s, the Muscular Dystrophy Family Foundation has made extraordinary things happen. Currently serving the state of Indiana, not only do they help individuals with Muscular Dystrophy get what they need to live each day to the fullest and maintain their dignity. The MDFF also provides essential items like wheelchairs, hospital beds, van lifts, ramps for homes, bathroom modifications, and shower chairs, to name a few. Over the last eight years, MDFF has donated a total of eight wheelchair-accessible vehicles from Superior Van & Mobility to deserving Indiana families.

The staff’s passion, board members, and donors are extraordinary individuals. Everyone does so much to help others. Superior Van & Mobility is grateful to be a part of their mission. Together we have a common goal, assisting others in regaining their independence.

For 2022, MDFF has also set a goal – to team up with Superior Van & Mobility and give away two more wheelchair-accessible vans to Indiana families affected by Muscular Dystrophy. The application process for Indiana residents will open March 15, 2022.  For more information on the Muscular Dystrophy Family Foundation or to submit an application, please visit https://www.mdf.org