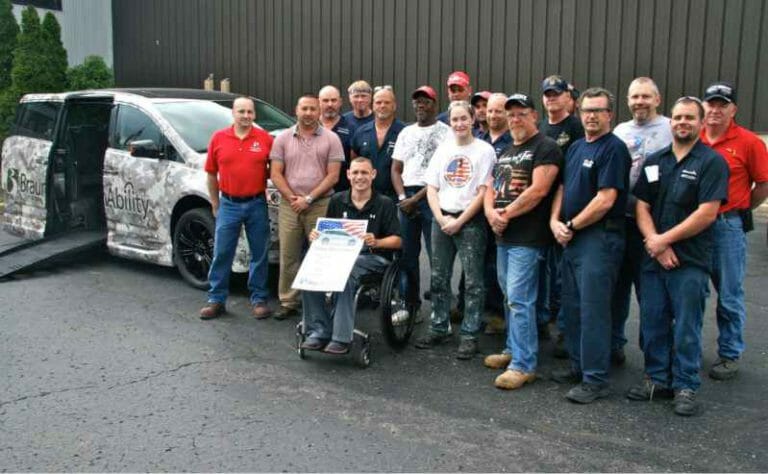 A very deserving disabled veteran was presented with an accessible van converted by BraunAbility, a manufacturer of wheelchair accessible vehicles.

Lance Corporal Michael DeLancey was presented a camo-wrapped accessible van alongside BraunAbility employees who have served in the military.

A very deserving wounded veteran was presented with a customized camouflaged accessible van on behalf of BraunAbility, a leading manufacturer of wheelchair accessible vehicles based in Winamac.

Lance Corporal Michael DeLancey, a native of Pinellas Park, Florida, was injured in Iraq in 2006 when a sniper’s bullet pierced his spinal cord, leaving him paralyzed from the waist down and critically damaging his lung. Despite the life-altering injury, DeLancey has been a force of positive change. He serves as an ambassador for Wounded Warrior Project and speaks with fellow veterans recovering from serious injuries.

“As a Marine, Mike has built his life upon the three Corps Values: Honor, Courage and Commitment,” said Kevin McMahon, Executive Vice President of Sales and Marketing. “These are values that our founder Ralph Braun believed in – and they are values that the people of this company hold true.”

The completely camouflage-covered vehicle will transport DeLancey to his volunteer work with veteran organizations and events in his home state of Florida and nationwide.

BraunAbility, founded in 1972, has a long history of serving veterans with disabilities. Many of the company’s first customers were newly injured veterans returning from the Vietnam war at a time when people with disabilities had very few mobility options.

Held at BraunAbility corporate headquarters in Winamac, the presentation was an opportunity for the company to not only honor Lance Corporal DeLancey, but current employees who had served in the military as well. In honor of DeLansky’s visit to the company and all company veterans, BraunAbility employees wore red, white and blue.

“Thank you for your service, for your commitment, and we celebrate the many ways you continue to serve our country,” added McMahon.