Introducing the all-new, Chrysler Voyager LXi, with a Power Fold-Out XT wheelchair van conversion from BraunAbility®. The new Voyager replaces the discontinued, Dodge Grand Caravan product line, that over the years, many have grown to love. The Chrysler Voyager is built from its predecessor, the Chrysler Pacifica. The two vehicles are similar, nearly identical, except for the available chassis packages that are currently being converted by BraunAbility®. The Chrysler Voyager will only be offered with the LXi package, while the Pacifica is available in a Touring-L, Touring-L Sport, and Touring-L Premium. 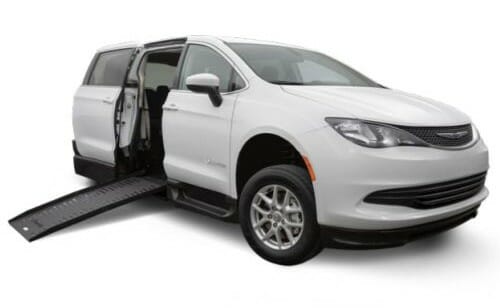 One of the best things about any, BraunAbility® wheelchair accessible vehicle is that they are meticulously designed to be easy to operate while providing unmatched maneuverability. A few of the advanced features of the, Chrysler Voyager Power Fold-Out XT include: single-touch power entry and exit system, via factory key-fob or set of interior switches found throughout the cabin; Easy-glide, power sliding doors; power operated, fold-out wheelchair ramp system; automatically controlled kneeling system (reduces ramp angle); removable front seats with removable cup holders to allow for up-front passenger or from-the-chair driving by the wheelchair user.

On the, BraunAbility® Power Fold-Out XT, Chrysler Voyager handicap accessible vehicle, both sliding side doors are power operated as is the integrated, fold-out wheelchair ramp system. But you may ask… what if the vehicle experiences loss of power? How would I be able to get out? It won’t be a problem! Every BraunAbility®, power operated, wheelchair accessible vehicle features an integrated, power back-up system that can be used to operate the ramp in an event of a power failure. Plus, with a fold-out ramp system, the ramp can be pushed manually to deploy for a safe vehicle exit. For exact ramp specifications and dimensions, see chart below.

When shopping for a wheelchair accessible vehicle, one of the main components you will hear about is the lowered floor. Lowering the floor is the key element to allowing a wheelchair user to maneuver about the interior cabin of a vehicle safely and comfortably. In the, BraunAbility® Power Fold-Out XT, Chrysler Voyager wheelchair conversion, the floor is lowered 14 inches. The drop in the floor takes place from the firewall (just behind the engine) all the way to the rear axle. This is what creates the taller door opening height for entry and exit, as well as what provides a wheelchair user a direct line-of-sight while driving or riding as a passenger. 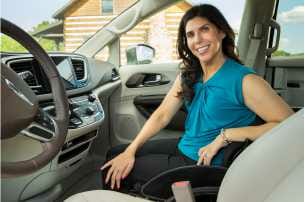 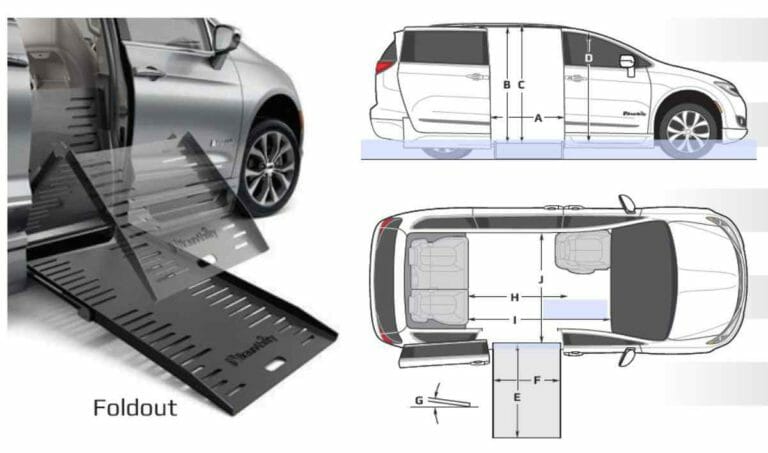